Father, let me never forget this. Thank You
for every moment of every day
that we get to live, laugh, breathe and love.
So many do not have any more minutes
I am thankful for the ones You've provided.

"For All the Saints," by the Lutheran Quartet

Christ, our King, our Savior dear
Be our strength, to us stay near

Christ, our Sufficiency, our Life, our All
At home, work, and in touch football

Christ beside me, Christ within me
Christ the One Who daily fills me

Love incarnate, Love Divine
Let Your love also be mine

Otis has been pulling his hair out in clumps. He does not eat the hair, but leaves it in a pile wherever he rests during his maleficent time: on our bed, near the slider where the sun shines through in the morning and it's nice and warm, on the sofa or chair.
When he was young and thin, he opened up a sore on his side that he kept licking, causing it to fester. We had the sore treated, and then provided Otie with the Cone of Shame, so that he would leave the sore alone. It worked and the sore healed.
But what we learned from those visits with the vet was that cats can be extremely allergic to dust, the food he's being given, or other environmental factors. Where we might get watery eyes or sneezy as a reaction, cats are more prone to have itchy skin.
Sometimes they just over-groom, because it's such a good feeling for them (an endorphine-releasing activity, like when people work out) and they just plain old want more of it.
Sometimes, they use the activity as a release of stress, in the absence of a loved person, or in the presence of another pet, for example.

I think Otie just likes to act out, and will continue to do it as long as he knows it irritates the hell out of me. I have moved his food and water bowls into the room with his litter and now keep the bedroom doors closed so as to minimize the area I might have to clean after him. I am trying to not over-react when he gets up on the counter or doesn't bury his what-not in the freshly cleaned litter box so as to minimize stress in his life.
He's so cute, and very friendly when he gets to know you; I want him to be happy and healthy too.


The Tigers are winning their Saturday afternoon game right now, in the 7th; after losing last night in the 9th to sucky 1-9 in their last ten games Kansas City - a blown save and loss for Shane Green. Well the Tigers are two games below .500 as the weather breaks, and game-time temps should routinely be above 35 degrees from here on out.
I am at peace with the fact that Justin Verlander, Max Scherzer, Rick Porcello, David Price, and Robby Ray are doing well in their starting positions with other teams. Doug Fister, Anibal Sanchez, and Drew Smyly are currently on the DL but could very well be doing quite well with other teams, and this is OK, too.


I hung a shelf in the kitchen for our herbs and spices near the stove, and couldn't be happier with it. Moni snagged it from the Lakehouse; and in It's honor, we are leaving the rack Lakehouse-blue.


The Cardinals have been daily visitors to our safflower feeders; the hopping and singing Robins have also enjoyed a cake of suet I've left out on a shelf on the deck. The European Starlings, despite hoards of them living among us, have not been able to get comfortable at the hanging suet cages, due to strategically placed baffles. Our last snow about a week ago stayed long enough into the day to show me tracks of bunnies galore, which I didn't see too much of during the winter. Downy Woodpeckers, Nuthatches and Chickadees have been regular visitors as well.


I recently bought a used 6-string Alvarez acoustic guitar. I like it - it sounds good and one day I will be a rock star.


I will not be growing pumpkins this year; nor will I attempt corn, carrots, or green bell peppers. My for-sures are going to be cucumbers for pickling, heirloom tomatoes, cherry tomatoes and jalapenos, along with my herbs: sage, rosemary, thyme, basil, parsley. And I will plant garlic this fall!


I 'made' a loaf of bread to-day (in my faithful Copper Chef pan), and it smells pretty good in here. It's the frozen kind you get at Walmart and then let sit for four hours thawing before you bake it. I basted it with butter and then seasoned with garlic powder for the final five minutes - hot and fresh, drenched in butter -  holy moly is it good!


The grass is beginning to green, but there are few buds yet - on this 21st day of April in the year of our Lord twenty eighteen.

"Praise to the Lord, the Almighty," by the Lutheran Quartet

I pray to-day that all my protesting family and friends
would come to know You, Your Son, and Your Spirit
through the fullness and truth of the Catholic Church.

Jesus, let the joy of the Resurrection be the enduring grace that guides my life.

Blessed be God forever!
Posted by David, son of Jack at 11:16 AM No comments:

'...well all of those dreams are an empty emotion, it can never been done.'
Posted by David, son of Jack at 7:12 PM No comments:

All the things in this world are gifts
and signs of God's love to us. The whole
world is a love letter from God.

~Peter Kreeft
Posted by David, son of Jack at 9:09 AM No comments:

'That boy is our last hope.'

I made a fruitful trip this beautiful Easter morning to Dexter, where we like to shop at the County Market ( https://bit.ly/2Gtlgfu ). Alas, the Country Market was not open on this glorious morn, but the POS Busch's was across the street. (Please consider this an absolute non-endorsement for this grocer. Over-priced from avocado to zip-lock, I cannot fathom why anyone would purposefully shop at Bush's if they had any choice at all.)

I was able to score four fresh onion buns that I thought I would enjoy later with some lunchmeat.

Well, I surely was not buying lunch meat at this establishment, so I came home with my cat litter, Buffalo Trace, and overpriced plain yogurt.

I began the kitchen festivities then with some pasta sauce:
In a tablespoon of EVOO, I sauteed one yellow onion diced, one green bell pepper diced, four garlic cloves diced, and one pound of ground Jennie-O turkey.
As the meat was simmering, I added 8 ounces of sliced mushrooms and one half of a beautiful 2 pound Heirloom tomato diced up. Then I added the jar of Ragu Bold and Spicy sauce.

Seasoned with dried basil and oregano, and with a bag of frozen broccoli and cauliflower thrown in  for good vegetable-measure, I left this on low for about an hour.

There was some boneless chicken breast I had pulled out of the freezer a couple days ago and wanted to use up, so I thought - hey, how about a sammich?!? 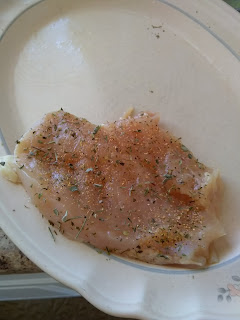 I butterflied the chicken and seasoned it with my garden herb mix, and then fried in a little EVOO-laden Copper Chef pan. 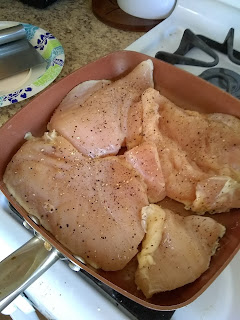 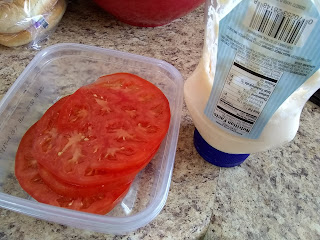 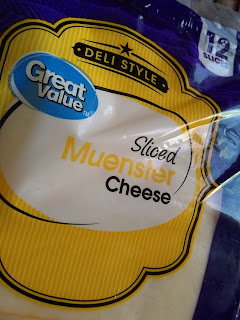 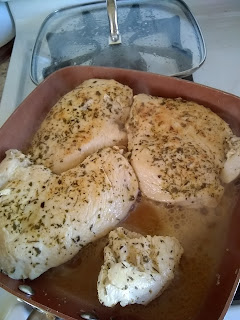 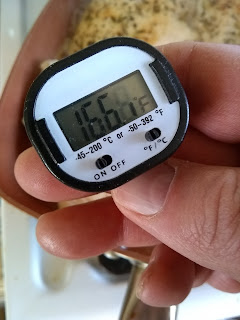 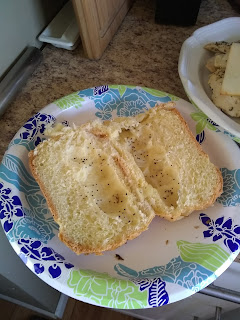 I topped the chicken with some sliced Munster cheese at the end. The pricey onion bun I dressed with some salad dressing and slices of the aforementioned good-ass tomato. 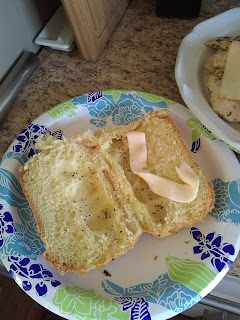 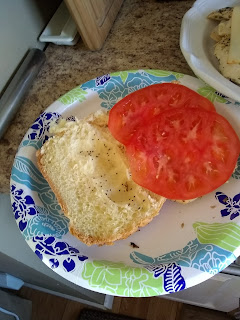 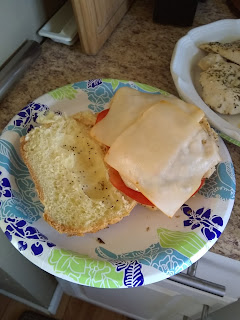 I then poured a ladle of the sauce over the meat, and took a couple photos. 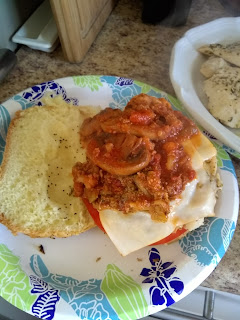 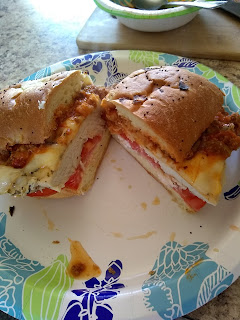 That Muenster cheese really compliments the tomato sauce and chicken, the buns didn't disintegrate with all the sauce (worth the five buck pricetag :-), and the tomatoes didn't fall apart during the devouring process.

This is going to be the premier sandwich on our menu, when we open our diner.

Easter Sunday - The Resurrection of the Lord

Jesus, let the joy of the Resurrection be the enduring grace that guides my life.